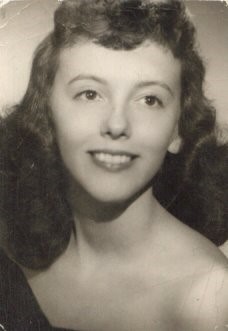 Kathryn Joan Ward Chilton will be remembered very lovingly by many. She died peacefully October 13, 2020, having coped with Alzheimer’s Disease for over a decade. “I was taught to love everybody” came from her lips often and true to form, her last discernible words were “I love you all.”

Kathy to most, 'Kack' to family and close friends, began her life in Sioux Falls, South Dakota on May 2, 1930, to her parents Charles and Juanita Senecal Ward.  Snow-filled winters and steamy summers oversaw her happy childhood, until the untimely death of her loving, adventurous father in a small plane he was piloting.  She was sixteen at the time and this tragic event profoundly affected Kathy, helping her appreciate close connections with others, while living her 'blessed life’, as she often termed it.

While attending college at Colorado University in Boulder, she met her husband, Mark--the love of her life for 66 years.  After a 1950 wedding, and their graduations a year later, there were many moves to many places with Mark’s railroad work, eventually with three children in tow.  Kathy kept the home fires burning warmly along the way, at one point living in a converted box car.  Kathy and Mark wound up in Elko, Nevada in 1957 and decided it was a perfect place to raise a family, so they left the nomadic life behind them. The Chiltons loved Elko and it allowed their pioneer spirits to shine.
Always productive and organized, Kathy Chilton filled the ensuing years with a myriad of activities at the same time she was successfully rearing her offspring.  She substitute-taught; managed various family business ventures; helped her husband start his own engineering firm and was an advisor on all they did.  She took part in local theater productions, held many leadership positions at First Presbyterian Church, and sang with their choir for over thirty years. She graciously hosted social gatherings and fun parties as she also performed a plethora of civic duties.  Kathy strongly supported the activities of her active children, which included attending a host of high school sporting events all over Nevada. She encouraged young girls to be strong members of society and advocated for women’s education through her membership in P.E.O.  In her decades-long role as a ‘career volunteer’, Kathy Chilton helped multiple community organizations, and rose to the level of state president of two: Hospital Auxiliary and the American Association of University Women.  Kathy was accomplished at her balancing act!

After her nest emptied and her kids flew far and wide, Kathy stayed involved and active in the community, but she found more time to nurture friendships, travel, work on her spiritual journey, and escape frigid Elko winters by spending them in Arizona.  When grandchildren started arriving on the scene, she was in her glory. Her fun-loving, upbeat, and open-minded spirit brought joy to young and old alike. Family reigned supreme in Kack’s world. How beautifully she gave unconditional love!

Kathy Chilton leaves behind so many that loved her dearly, but none more than her family: Brother Jim Ward, sister-in-law Carole, and their descendants; Daughter Cheri and son-in-law Doug Smith, daughter Carey and son-in-law John Charyk, son Ward and daughter-in-law Mariam; Grandchildren: Corbin and Ivan Smith, Mark and Kathryn Charyk (and all four of their spouses) and Tara and Anna Chilton; Great grandchildren: Cora, Lillian, and Bennett Smith and Cooper Luce, Iris and Beatrice Calkins Charyk and Chloe Jenkins-Charyk. A private family memorial gathering will be held later.

Her children invite those wishing to honor their mother to donate to Great Basin College (GBC Foundation P.O. Box 2056 Elko NV 89803), an institution of higher learning that Kathy helped found.

Kathy was always appreciative of and thankful for her ‘wonderful’ life, and often asked: “Why am I so blessed?” Her family believes: She was ‘Blessed to be a Blessing’ and that having Kathryn Chilton around for 90 years made the world a better and more loving place.