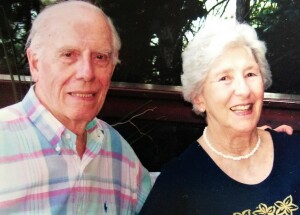 A child of Spokane, Jeanne Ahrens lived her nearly 99 years in the hometown she loved.

The daughter of Loraine Lavigne and stepdaughter of Edwin Lavigne, she attended Our Lady of Lourdes School, Lewis and Clark High School and Fort Wright College, where she studied art.

Jeanne was part of the Greatest Generation that came of age during World War II. She would marry a veteran of that war who served as an Army officer in the European Theater.

Jeanne and Richard G. "Dick" Ahrens, classmates at Lewis and Clark, were married May 3, 1947, and this year celebrated their 73rd wedding anniversary.

The couple's first home was on Manito Boulevard, not far from Jeanne's childhood home. In her figure skates, she had carved the ice on Manito pond as a girl, and still had her vintage Flexible Flyer sled.

She often talked of summers she had spent as a girl in farm country outside Spokane with an aunt, uncle and cousins.

In 1966, Dick and Jeanne built a home closer to Ferris High School. Their three children, Leslie, Julie and Bill, graduated from Ferris.

Jeanne was most at home in her garden, where she often could be found planting, weeding, pruning or tending blooms and tomato plants. Roses and geraniums she grew became kitchen-table centerpieces. An adventuresome cook, she relished making meals her family loved.

Antiques, reading and art were among her many interests. She had done watercolors and sketching, and admired the mother-and-child paintings of Mary Cassatt.

Picnics, conversations over coffee, playing kitchen with a grandchild and other simple pleasures made her happy.

She had been involved with Camp Fire as a Blue Bird leader, volunteered at Deaconess Hospital, and was a member of the Friends of Manito.

Travels, too, were highlights of her life. She and her husband savored the sights of the Oregon Coast, Banff, Boston, New York, Washington, D.C., California and Florida. With daughter Julie, she took a memorable journey to Ireland and England, and she enjoyed visits to Boise to see son Bill and grandson Tucker.

Her family especially thanks the nurses and other caregivers at Rockwood Retirement South. We are also thankful for the loving and constant care that Jeanne's daughter Leslie provided in her mother's later years.

A family memorial gathering is planned at a later date. Donations in Jeanne Ahrens' honor may be made to the Friends of Manito, 4 W 21st Ave, Spokane, WA 99203.

To send sympathy gifts to the family or plant a tree in memory of Loretta Jeanne Ahrens, please visit our tribute store.