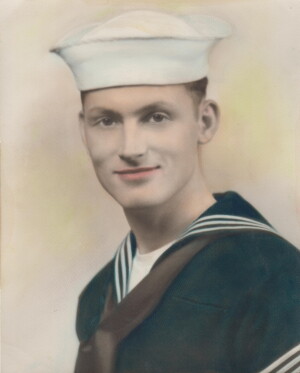 Willis Cox was welcomed into the loving arms of his Maker on October 25, 2020, at the Adult Family Home (AFH) where he resided. He joined the 225,000+ Americans to date who have lost their lives to Covid-19. He also suffered from Alzheimer’s Disease which became evident in 2008.

Willis (Bill) was born on August 19, 1934 in Sioux City, IA to Violet and Earl Cox, Sr. He was welcomed by two sisters Leona and Arline, two brothers Donald and Earl, Jr. (Guy), and his maternal grandmother Ruth Castle. When Bill was 10 years old, the family moved to Spokane, WA. He attended many different schools and later took a job with his stepmother at the Labor Union Café and worked for his father in his dad’s auto repair shop. Bill loved cars and became an excellent engine repairman. As a teen he had several cars, and with a friend he built a “souped up engine” for one of the cars. Later, Bill worked at The Crescent Department store before enlisting in the Navy and served 2 years active duty and 6 years in the reserves. He was stationed at Pier 91, Seattle and was sent to both the North Pole and the South Pole on the USS Burton Island ice breaker. He also went to New Zealand and Peru, S.A. After his discharge from the Navy, Bill resumed working at The Crescent in the Marking and Pricing Dept. as Assistant Manager.

In 1968 Bill married Eileen Thomas and they had two children Shawn Russell and Kendra Renee. The kids were the joy of Bill and Eileen’s lives. The couple joined St. Paul’s Methodist Church and later changed to Unity Church of Truth. In 1972 Bill was employed at Hobart Corporation. He soon became Manager of the Parts Department where he worked for 28 years before retiring in 1998. Bill and Eileen were active in church and became youth ed teachers for a time. Later, Bill served on the Board of Trustees for The Unity Center of Divine Love and Light. The Cox children kept the couple busy with many activities, church camp, basketball, soccer, Boy Scouts, Camp Fire, tennis and debate.

Bill was a self-motivated man. He took correspondence courses to learn more about auto repair and small appliance repair. He was a member of the Rosicrucian Order, San Jose, CA and met regularly with their local group. He was a hardworking individual and could repair almost anything around the house that was broken. He had many friends. He bowled on a team and practiced Karate for quite some time. He also was a member of a small reading group of close friends. He loved watching the Gonzaga men play basketball on TV and going to the Gonzaga women’s games. Bill had a great sense of humor; he was easy going with a pleasant personality and was an honest and highly respected member of the community.

Bill is survived by his wife of 52 years, his son Shawn (Jennifer), his daughter Kendra (Luis), granddaughters Tricna, Lucera, Abigail and Amalia, and a great grandson Chance. He has many beloved nieces, nephews, cousins, and three sisters-in-law.

A special thanks to the Providence Sacred Heart Medical Staff, EMTs, and staff at his AFH, and Hospice workers for risking their own health while caring for Bill in his final days.

To plant a tree in memory of Willis Albert Cox, please visit our tribute store.